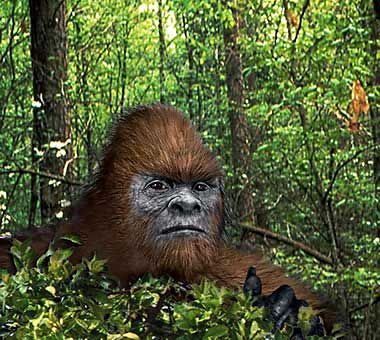 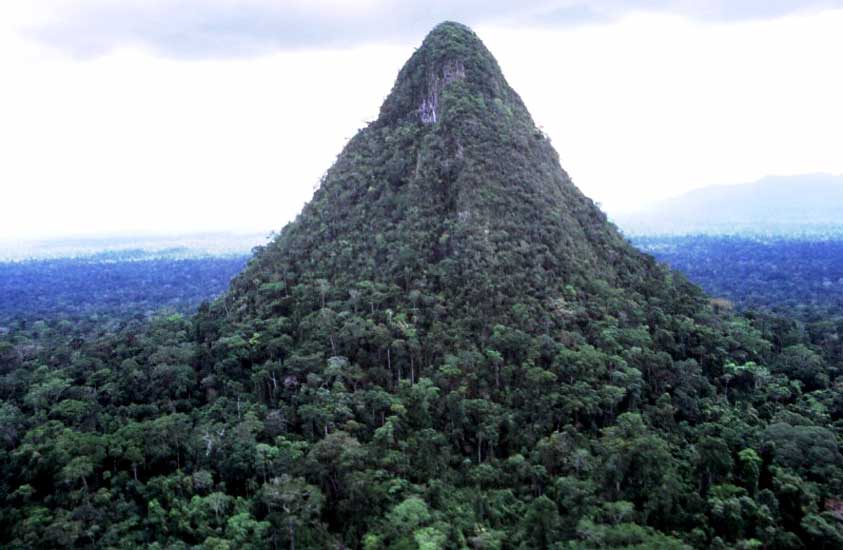 How about some 'Real Adventure'?! Track down Bigfoot or the animal that goes by the local names like 'Mapinguary' and we will give you a total refund on the tour!

The area of interest for this 'monster hunt' is on the jungle plateaus and old volcanic uplifts near Contamana - where truly unique 'lost world' fauna and flora are found, and with many species yet to be discovered.

Read below the presently published information on the Amazon Bigfoot. The Shipibos, the majority local natives, have a wealth of folklore and anecdotal information as well. We will publish that information here as soon as possible. 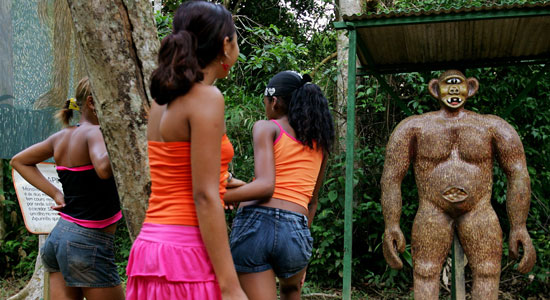 RIO BRANCO, Brazil: Perhaps it is nothing more than a legend, as skeptics say. Or maybe it is real, as those who claim to have seen it avow. But the mere mention of the mapinguary, the giant sloth-like monster of the Amazon, is enough to send shivers down the spines of almost all who dwell in the world's largest rain forest.
The folklore here is full of tales of close encounters with this Big Foot of the Amazon, stories so widespread and so consistent in their details that in recent years a few scientists have organized expeditions to try to find the mapinguary (pronounced MA-ping-war-E). They have not succeeded yet.
"It is quite clear to me that the legend of the mapinguary is based on human contact with the last of the ground sloths," said David Oren, former director of research at the Goeldi institute in Belém, at the mouth of the Amazon River. "We know that extinct species can survive as legends for hundreds of years. But whether such an animal still exists or not is another question, one we can't answer."
Oren said he has talked to "a couple of hundred people" who claim to have seen the mapinguary in the most remote parts of the Amazon and a handful who say they have had direct contact. Nearly every Indian tribe in the Amazon, including those who have had no contact with each other, have a word for the creature, which can usually be translated as "the roaring animal" or "the fetid animal."
In some areas, the creature is said to have two eyes, while other accounts talk of it having only one, like the Cyclops of Greek mythology. Some versions also talk of a gaping, stinking mouth in the monster's belly through which it consumes humans unfortunate enough to cross its path.

But all accounts agree that the creature is tall - two meters, or about seven feet, when it stands on two legs - that it emits a strong, extremely disagreeable odor, and that is has thick, matted fur covering a carapace that makes it all but impervious to bullets and arrows.
"The only way you can kill a mapinguary is by shooting at its head," said Domingos Parintintin, a tribal leader in the state of Amazonas. "But that is hard to do because it has powers that can make you dizzy and turn day into night. So the best thing to do if you see one is climb a tree and hide."
Geovaldo Karitiana, a 27-year-old Indian, says there is no doubt that the mapinguary is real. He claims to have seen one about three years ago, as he was hunting in the jungle near an area that his tribe calls "the cave of the mapinguary."
"It was coming toward the village and was making a big noise," he said in a recent interview on the tribe's reservation in the western Amazon. "It stopped when it got near me, and that's when the bad smell made me dizzy and tired. I fainted, and when I came to, the mapinguary was gone."
Karitiana's father, Lucas, confirmed the account. He said that when his son took him back to the site of the encounter, he saw a cleared pathway where the creature had departed, "as if a boulder had rolled through and knocked down all the trees and vines."
Though the descriptions of the mapinguary may resemble the sasquatch of North America or the yeti of Himalayan lore, the comparisons stop there. Unlike its counterparts elsewhere, the creature does not flee human contact, but aggressively hunts down the hunter, turning the tables on those who do not respect the jungle's unwritten rules and limits.
"Often, the mapinguary gets revenge on people who transgress, who go where they shouldn't go or harvest more animals or plants than they can consume, or set cruel traps," said Márcio Souza, a prominent Brazilian novelist and playwright who lives in Manaus and often draws on Amazon history and folklore in his works. "There is clearly an ecological function involved."
Amazon folklore, in fact, is full of fanciful creatures that are used to explain unwelcome or embarrassing phenomena. The boto, for example, is a type of dolphin that transforms itself into human form, wears a white hat to cover its air spout, and then seduces and impregnates impressionable young virgins.
When a hunter or woodsman gets lost in the jungle, blame is often placed on the curupira, a mischievous red-haired pixie who has feet that face backward and takes delight in making trails that lead travelers astray. And when an experienced navigator drowns in calm waters, he is usually said to have fallen victim to the iara, a cross between a siren and a mermaid.
If you're a rubber tapper and you're returning to camp empty-handed, you'd better have a pretty good explanation for your boss," said Marcos Vinicius Neves, director of the government's department of historical and cultural patrimony in the state of Acre, where a statue of a mapinguary has been erected at a public plaza here in the capital. "The mapinguary is the best excuse you could possible imagine."
Souza, the novelist, counts himself among those who believe the mapinguary is just a myth. The deforestation of the Amazon has accelerated so rapidly over the last generation, he argues, that if the creature really existed, "there would have been some sort of close encounter of the third kind by now."
Partly for that reason, most zoologists scoff at the notion the mapinguary could be real. The giant sloth, or Megatherium, was once one of the largest mammals to walk the earth, bigger than an elephant. Fossil evidence is abundant and widespread, having been found as far south as Chile, and as far north as Florida. But the trail inevitably stops cold thousands of years ago.
"When you travel in the Amazon, you are constantly hearing about this animal, especially when you are in contact with indigenous peoples," said Peter Toledo, an expert on sloths at the Goeldi institute. "But convincing scientific proof, in the form of even vestiges of bones, blood or excrement, is always lacking."
Glenn Shepard Jr., an American ethnobiologist and anthropologist based in Manaus in the central Amazon, said he had been among the skeptics who considered the mapinguary "a rural legend" until 1997, when he was doing research among the Machiguenga people of the far western Amazon, in Peru. Tribal members he questioned there about local wildlife all mentioned a fearsome sloth-like creature that inhabited a hilly, forested area in their territory.
Shepard said "the clincher that really blew me away" came when a member of the tribe said as a matter of fact that he had also seen a mapinguary at the natural history museum in Lima. Upon checking, Shepard found that the man was referring to a diorama with a model of a giant, prehistoric ground sloth.
"At the very least, what we have here is an ancient remembrance of a giant sloth, like those found in Chile recently, that humans have come into contact with," he said. "This was a very precise description of an animal and its habits, not some supernatural thing, which the Machiguenga also have in their cosmology."
But for now, the mystery of the mapinguary is likely to continue, as is the search. "There's still an awful lot of room out there for a large sloth to be roaming around," he said. 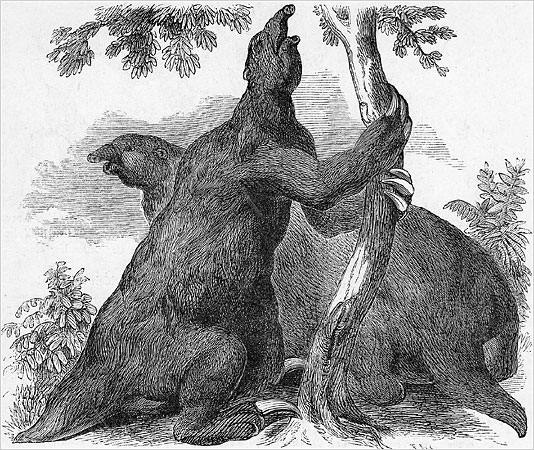